What are the Maximum Wind Limits for a Commercial Aircraft?
Search

What are the Maximum Wind Limits for a Commercial Jet Aircraft?

How much wind is too much wind to land or take-off?

What’s the strongest wind passenger jets can fly in?

There is no single maximum wind limit as it depends on the direction of wind and phase of flight. A crosswind above about 40mph and tailwind above 10mph can start to cause problems and stop commercial jets taking off and landing.

It can sometimes be too windy to take-off or land. The limitations are in place for the safety of the passengers and crew.

In aviation, speed is measured in Knots (Nautical Miles Per Hour). This is converted to Miles Per Hour (mph) by multiplying it by 1.15.

Aircraft maximum wind limits are split up into:

Aircraft want to take off and land into a headwind as this reduces the distance they require to get airborne or distance need to bring the aircraft to a stop. If an aircraft is standing still on the runway, and has a headwind component of 20kts, that’s 20kts of air flowing over the wing and therefore giving the aircraft an airspeed of 20kts, even though it’s not moving. If it has a take-off speed of 140kts, the aircraft’s ground speed would only need to be 120kts to get airborne because it already has 20kts of airspeed from the wind.

In general, commercial aircraft demonstrate a capability to land with a certain crosswind at the aircraft certification stage. This demonstrated limit is not a maximum limit, but is the figure that most operators (airlines) will choose to use as a limit – it’s not sensible to have an uncapped figure. Therefore, the figures provided below for the B737-800 are typical of those dictated by an operator, not the manufacture.

On a dry runway, a Boeing 737-800 has a maximum allowable crosswind component of approximately 33kts. For taking off on a wet runway it’s about 27kts. The actual figure might be slightly above or below this because the airline can choose to set its own more restrictive value if it wishes. If the cross-wind component was greater than this, the aircraft might have an option to choose another runway which is more into wind, but in the case of a single runway airport, it wouldn’t be able to depart.

There is no headwind limitation for most commercial aircraft for take-off, and therefore is no maximum overall limit for take-off (or landing). If there was a 100mph wind, all of which was a headwind component, in theory the aircraft wouldn’t be restricted from taking off. However, the reality is that there are wind limits for opening and closing the aircraft doors (around 45kts) and no pilots would attempt to taxi and depart in such conditions. The airport would have closed in such circumstances anyway!

The maximum allowable tailwind value is usually between 10-15kts. Tailwinds are easy to avoid at most airports, as if you simply take off in the other direction, the headwind has now become a tailwind. Tailwind has the opposite effects of a headwind, increasing the runway distance needed to take off and land.

However, at some airfields, it’s actually better to accept a tailwind on one runway rather than a headwind on another because of potential terrain issues. A good example for this is Florence (FLR). It’s actually better to accept a bit of a tailwind on runway 23 than a headwind on RWY 05 because of the very large hill/mountain in very close proximity to RWY05. If you were to lose an engine, you must still be able to meet a climb gradient guaranteed to get you above the terrain on RWY 05, which can mean you are very weight limited even with a headwind. You can actually increase your maximum take-off weight even by accepting a tailwind on RWY 23.

On a dry runway, the Boeing 737-800 crosswind limitation is the same as take-off, 33kts. On a wet runway this reduces to a maximum of 30kts.

The maximum tailwind component for take-off and landing is usually between 10-15kts, but the actual figure that can be used may be performance limited by runway length, aircraft weight etc.

There are limits on when the cargo and passenger doors can be opened. If the wind is more than about 45kts, it isn’t deemed safe to open the doors.

Other things that affect the maximum allowable wind:

The airport itself may limit the maximum allowable wind limits. For example, at London City Airport (LCY), the maximum crosswind limit is 25kts for all aircraft because the runway is only 30m wide (compared to a standard width of 45m or sometimes even 60m at larger airfields).

The maximum wind limits between aircraft differ because of aerodynamic and handling differences. Generally speaking the larger the vertical stabiliser compared to the rest of the aircraft, the more the plane will be affected by a crosswind. Larger aircraft counteract this by having larger control surfaces therefore giving the pilots greater control authority. If you take the Boeing 777 for example, it’s crosswind limit for landing on a dry runway is 40kts – more than a Boeing 737.

Some of the same aircraft types even differ because of their configuration. For example, a standard A320 has a higher crosswind limit than an A320 with Sharklets (Airbus’s version of winglets), as the Sharklets are an additional vertical surface for the wind to act upon. 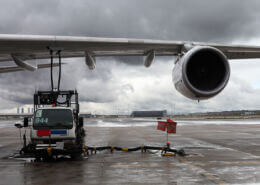